What is the Schoenstatt Rosary Campaign?

History of the Schoenstatt Rosary Campaign

In 1950, John Pozzobon, a member of the Schoenstatt Movement in Santa Maria, Brazil, received a picture of the Mother Thrice Admirable from a Schoenstatt Sister of Mary who suggested that he take the MTA picture into the homes of many people. He accepted this idea as a holy task and mission. For 35 years John Pozzobon took the MTA on pilgrimage in southern Brazil. He walked a total of more than 87,000 miles and brought the picture of Our Lady of Schoenstatt to a different family each day. He carried the picture in a shrine-shaped frame and went from home to home, into schools, prisons, and hospitals. John Pozzobon would gather people together and pray the rosary with them. On June 27, 1985 God called Deacon John Pozzobon to his eternal home. His mission continues. On December 12, 1994, the Bishop of the Diocese of Santa Maria, Brazil, opened the cause of beatification. The Rosary Campaign has now spread throughout the world.

Objective of the Rosary Campaign

What takes place when the Pilgrim MTA Shrine goes to visit families? When the Blessed Virgin Mary went to visit her cousin, Elizabeth, her presence brought many blessings. The Blessed Mother in her Pilgrim Shrine brings blessings into the homes of those who receive her. There are three special graces we receive in the Shrine of Schoenstatt, and these graces are received through the Pilgrim MTA Shrines as well. They are (i) the grace of a home; (ii) the grace of inner transformation; and (iii) the grace of apostolic fruitfulness. Mother Thrice Admirable is calling on all who enter her service to help her in the work she is initiating from Schoenstatt.

Mary needs you to bring Jesus and her into our homes, schools and gathering places. She wants to transform our minds and hearts with her graces from the Schoenstatt Shrine and to spread the Kingdom of God by bringing Christ anew to those around us. She is inviting you to help her in her mission.

If you live in the Dallas Diocese, please contact:
Jo Ann Scamardo

If you live in the Fort Worth Diocese, please contact:
Anita Mitchell 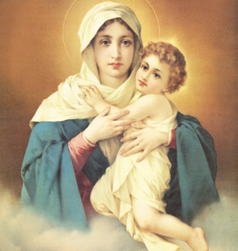 “Take this picture of the Blessed Mother and give it a place of honor in your home. Then your home will become a little shrine in which the picture of grace will mediate many graces, create a holy family atmosphere, and form holy family members.”